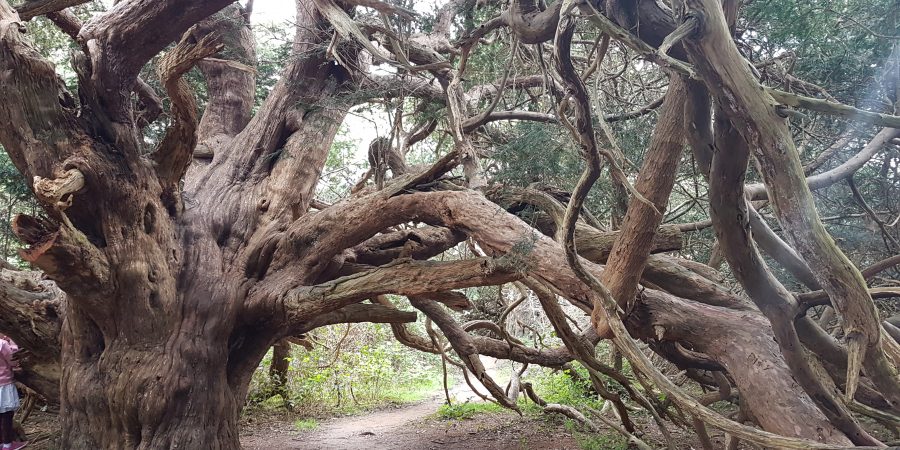 Enjoyment factor for kids: overall about 6-8/10

Facilities: None, bring a rucksack with plenty of sugary snacks to keep energy up.  Wilderwee’s are the way to go! 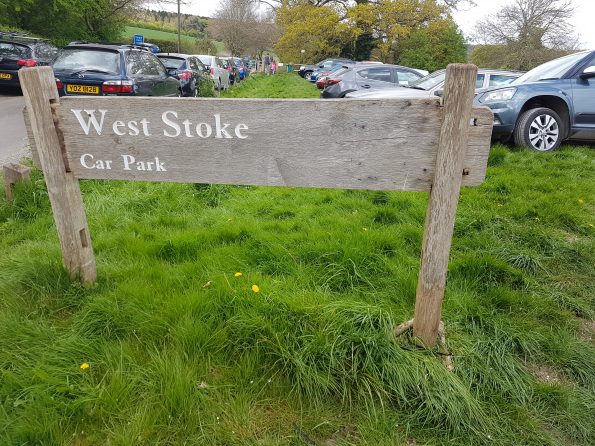 This afternoon we decided to go and find the Bluebell’s over in Kingley Vale.  We drove over to park in West Stoke Car Park, and then decided to follow all the other people out of the car park to the gate with the path behind it.  My Mum had told me the bluebells here were the best, and we thought everyone else must be here for the same reason, so followed them.

Turns out they weren’t… they were here for something much better… the bluebells were in the opposite direction! Doh! 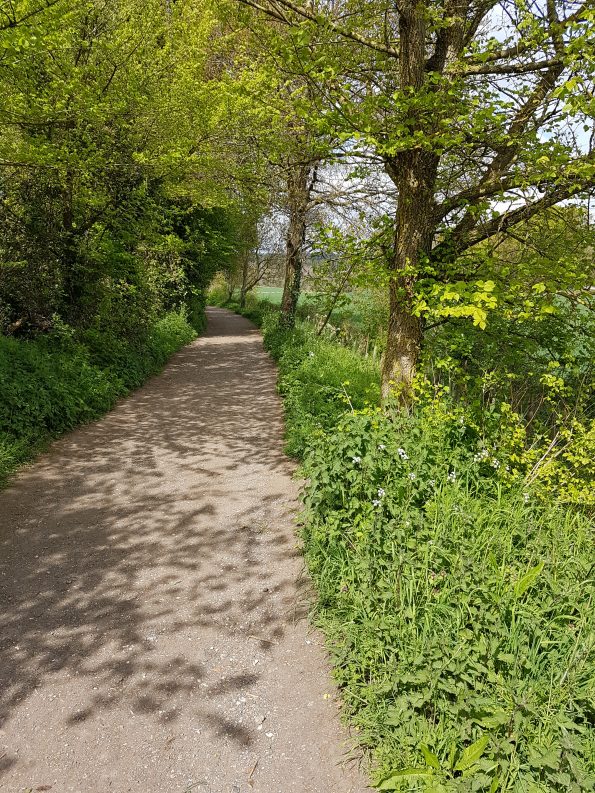 First, our walk took us down a long well-defined path, not much of interest for the kids here, though they did manage to pick up a few sticks to play with.  After what felt like a fair while we came to another gate.  It was much more interesting through here, and there was a sign explaining about the forest.  Some of the Yew trees are around 500 years old, and the Yews are thought to have been there for nearly 2000 years. 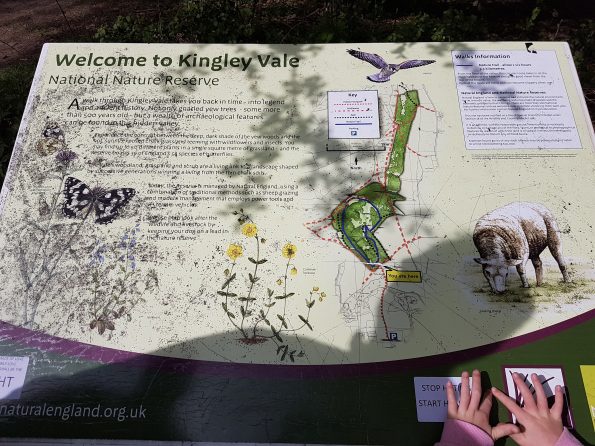 The kids immediately wanted to climb the trees, and we did let them but I was conscious that my kids can be a bit rough and the trees have survived this long, they deserved a bit of respect.  So, on the whole, they climbed on the ones that had already fallen.  They also had to be careful not to disturb the local tree huggers, as we were walking at the same pace as a couple that had come along to hug and kiss all of the trees… which made the climbing and shouting coming from my two ever so slightly embarrassing.  We decided to follow the nature trail as it was getting more and more obvious that there weren’t going to be any bluebells anywhere nearby, and the map showed a nice route round that took 1.5 hours.  That route would NEVER take 1.5 hours with two children in tow! 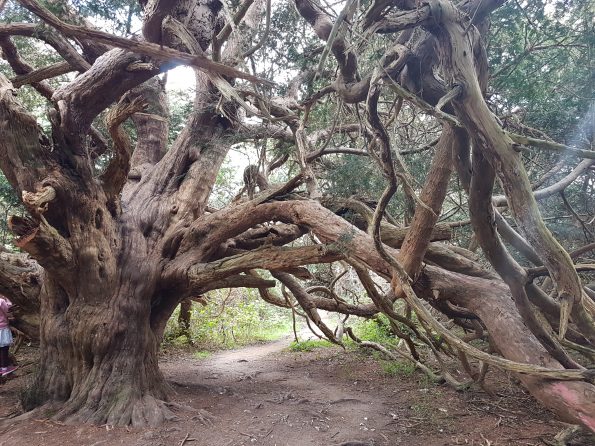 We kept on exploring the forest and dealt with Wilderwee’s (wee’s in the wilderness…), and luckily just managed to catch the 3-year-old before he did a wilderpoo.  After a while we were starting to get a bit tired, the track we were following was pretty wiggly, and so we decided to head just up to the next corner and then turn back. However, when we got to the next corner we found Kingley Vale, a most impressive hill.  There were woodland paths either side of us with more gentle slopes – however, we couldn’t see those from where we were stood, just a pretty dangerous looking steep scramble up to the top, so, of course, that is the path we chose.

We decided we really wanted to see the view from the top and started to head up.  The kids were doing pretty well, though it took a lot of effort to keep them walking in the right direction as they were playing games involving throwing things and chasing them, as we were on a hill this invariably meant they kept running back down the hill.  We didn’t really think we would get up the super steep scramble at the top, but we went as high as we could.  However, when we mentioned turning back down again both kids very assertively told us they wanted to make it all the way to the top, and with a bit of pushing, shoving, crawling, panicking, and general “aaaaaagh” we made it! 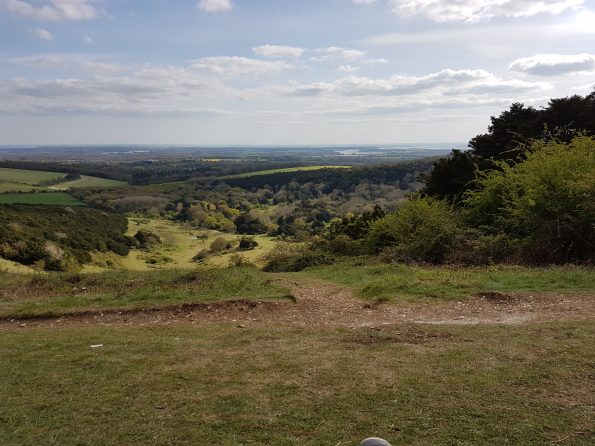 And oh my was it worth it!  As Jess said “We can see the whole world from here Mummy!” and it sure as heck felt like it.  You could see right across Chichester Harbour and beyond.  Other people were walking up and sat near us.  A man told us how he used to come up here as a child but took the much gentler route up through the forest, and how he used to believe it was haunted. Ah, yes, the gentle route, that would have been much easier… but possibly not as much of an adventure!  We did however, decide to take that route back down again, which took us through a fabulous gnarly wood and past a pond with tadpoles in.  The kids were still full of joy having made it up the hill, but they did start to tire.  The route back was much quicker, and we didn’t take the nature trail back through the forest, but the bridle path next to it instead.

All in all, it was a bit of an adventure, and the kids were super tired, but feeling pretty good about their achievements when we got home.  According to my phone we did 10,000 steps and walked 7.5km today, we were out for about 3.5 hours including tree climbing and rests.  It isn’t a walk for the faint-hearted, and we had to carry the kids by the end (though they did pretty well considering).

When I was little my Dad used to drag me and my sister out on long walks, often in the rain, often with a slightly dodgy sense of direction, always with a bit of adventure, and this was definitely a wally walk.  I’m just glad it didn’t rain.

This blog is for busy parents who want to make sure their kids have a fantastic childhood, but are exhausted and have little spare time.  The crafts and activities are minimum effort for maximum effect, and the venues are judged on wine.